W.A. Brown Contractors was started by Wallace A. Brown Sr in the 1940s. With a mobile plant, old used equipment, and equipment made by himself, he travelled around the province before permanently settling in Sussex in the late 40’s. 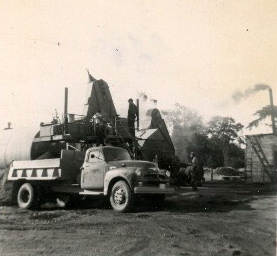 In 1957, W.A. Brown Contractors was changed to Brown’s Paving Ltd. After operating in the Sussex area for a number of years,Wallace Brown Sr. turned over the ownership of the company to his two sons, Calvin and Wallace Jr. He remained active until his death in 1978.

The company continued to grow under the cooperation, persistance, and hardwork of the two brothers. Calvin, taking care of the estimates and road crews, while Wally looked after the shop and plant. Many upgrades were done over the years to the shop, plant, and equipment as times changed and the world started getting faster. The company went through changes again when in 1996 Calvin passed away leaving the running of the family business to Wally.

Today the company is still run by Wallace Jr. with help from his nephew Corey McAllister and his daughter Katie. The company remains a family owned and operated business.